Gentrack has announced that E.ON has chosen the vendor’s Velocity utility billing and customer management solution for its UK and Romanian energy supply businesses.

This is the second contract for Gentrack among the UK’s Big 6 suppliers in the last six months, following December’s announcement of a ‘significant contract’ with Npower to implement the vendor’s Junifer CIS. The Junifer system has in recent years become the go-to choice for many of the UK’s independent energy suppliers, supporting rising names such as Bulb, Green Star Energy, Robin Hood Energy and Octopus. Gentrack acquired the Junifer business in early 2017. Meanwhile, the vendor’s Velocity system has also been deployed in the UK by several independent energy suppliers, including OVO Energy, as well as by a number of water utilities. Including the latest announcement, Gentrack is now supplying 38 UK energy customers with either Velocity or the Junifer CIS. 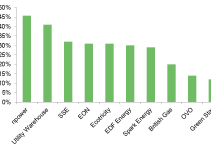